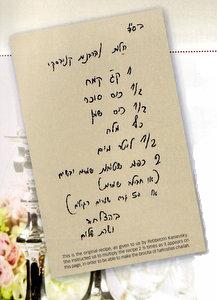 The Bais Yaakov Cookbook is dedicated to the memory of the beloved Rebbetzin Batsheva Esther Kanievsky. The dedication, in part, shares that "The Rebbetzin was a tremendously unifying force in Klal Yisroel (The Jewish Community). Everyone came to her warm humble home, which pulsated with Kedusha (holiness), to request a Bracha (a blessing), to receive Chizuk (encouragement and strength), and to unburden a broken heart…" The Rebbetzin was known for her exquisite challah, a water challah, and for the joy she found and shared in the great mitzvah of hafrashas challah...the making and blessing of challah.

The recipe above is the original recipe written by Rebbetzin Kanievsky and appears in the Bais Yaakov Cookbook: "This is the original recipe, as given to us by Rebbetzin Kanievsky. She instructed us to multiply the recipe by 2 1/2 times (as it appears in the cookbook), in order to be able to make the brocha of hafrashas challah."