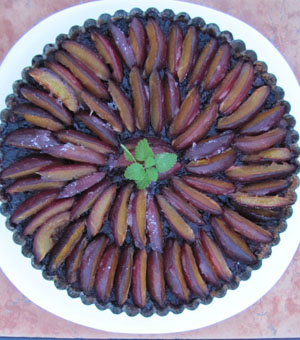 My mother received a copy of The Settlement Cookbook when she was married in 1937 and has been cooking from it ever since. From it she learned to make the following open-faced tart with a meurbeteig (butter or margarine) crust, a southern German and Alsatian recipe. My mother and I make all our open-faced tarts based on the Settlement recipe. At Rosh Hashanah, we fill the tart with Italian plums, but in the summer it is delicious with peaches, blueberries, or blackberries.

To make the crust, mix the flour and sugar together. Using your hands or a pastry blender, cut in the butter until the mixture resembles coarse crumbs. Add the egg yolk, a dash of salt, and brandy to moisten the crumbs. Or mix the dough in a food processor fitted with a steel blade.

Turn the dough onto a board and knead briefly. (Skip this step if using a food processor.)

Put the dough into the pan and, using your fingers, pat it out to cover the bottom and up the side. Refrigerate for 30 minutes.
Preheat the oven to 450 degrees and prebake the crust for 10 minutes. Reduce the oven to 375 degrees and bake another 5 minutes. Remove from the oven.

To make the filling, mix the jam with the brandy and spread on the crust. Cut the plums in half lengthwise and remove the pits, then cut each half in thirds. Arrange the wedges in a circle, each overlapping slightly, so they eventually form a spiral into the center.

Sprinkle with the sugar, cinnamon, and lemon zest, and then scatter the berries over top if using.
Reduce the oven to 350 degrees. Return the tart to the oven and bake for about 30 minutes or until the crust is golden brown and the plums are juicy.