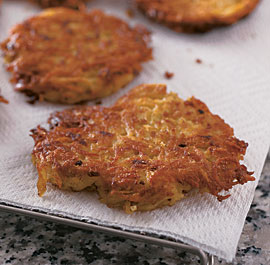 It just wouldn’t be Chanukah without potato latkes! I’ve given measurements for the recipe below, but don’t worry too much about making sure everything is exact. If you follow my tried–and–true instructions, your latkes will be wonderful no matter what. Serve them with lots of applesauce and sour cream.

About Bubbe: She was born in 1927 in a small town in New England, where she has lived all her life. Until she was 73, she worked full-time as a teller in a local bank, and still managed to serve a hot kosher meal every night of the week. At the age of 80, she began a whole new career as a food writer and host of the online cooking show Feed Me Bubbe that can be seen on JLTV and online at .  She has been featured on PBS Frontline and ABC World News and in The Wall Street Journal and The Boston Globe, among other media outlets.

Grate the potatoes and the onion into a large bowl. (If you want, you can cut the potatoes and onion into pieces and then blend them in a blender or a food processor.) Do not remove the liquid from the potatoes. Mix in the eggs, salt, pepper, and flour or matzo meal. Let the mixture stand for 5 minutes to thicken a little bit.

In a large frying pan, heat a layer of oil that is about 1/8 to 1/4-inch deep until it is hot, but not smoking hot. To make each latke, use a large spoon to transfer some of the potato mixture to the pan. Fry the latkes until they are well browned on both sides and crisp around the edges. Drain the latkes well on paper towels. Serve them immediately or keep them warm in an oven that you have heated up to 250°F.

These can be frozen with aluminum foil between the layers and reheated in a 400°F oven for 5 to 6 minutes. It makes it easier when you prepare them ahead of time and they taste very good and crispy.