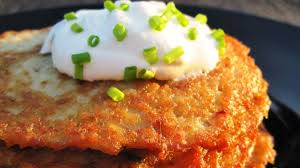 Where is it written that freshly grated potatoes are the only way to make great potato latkes? For those of us who are short on time but love the taste of fried Hanukkah treats, fear not...we have a solution that will produce great latkes in a fraction of the time. We use frozen hash brown potatoes, add some extra ingredients and, presto, crispy, golden, yummy latkes.

Directions:
Squeeze the excess moisture from the defrosted potatoes.
Using a spoon, mix the first 6 ingredients together in a large bowl until thoroughly combined.

Pour about 1/4 inch of oil into a large skillet and heat over medium-high heat. When the oil is hot, drop spoonfuls of the potato mixture into the oil; flatten slightly with the back of the spoon. When the first side is brown and crispy, turn over and brown the other side.Do not crowd.  Remove the browned latkes with a slotted spatula, and drain on paper towels on a large platter or baking sheet.  Continue frying batter, and adding additional oil with each batch, until done.
Serve warm with homemade apple sauce, sour cream with chives, smoked salmon & cream cheese, or the topping of your choice.

Smoked Salmon & Cream Cheese
Combine 4 ounces of minced smoked salmon or crumbled smoked trout, 2 ounces of softened cream cheese,  2 tablespoons of minced red onion, 1 tablespoon of rinsed, minced capers and a squeeze of fresh lemon juice. Use sour cream as needed to thin out the spread. Place a spoonful on top of each latke and sprinkle with chopped fresh dill or add the chopped dill to the mixture.

Yield: Makes about 12 large latkes or 24 small ones.

*We added very little salt because Alexia potatoes are pre–seasoned.  We did add additional pepper.
Tips: Potato mixture can be prepared, covered and refrigerated up to 6 hours before frying.  Stir to combine before using. To re-heat fried latkes: Place the latkes on a cookie sheet and heat in a 400-degree oven until hot.
Recipes: Side Dishes, Potato Latkes, Parve (Dairy Toppings), Kosher