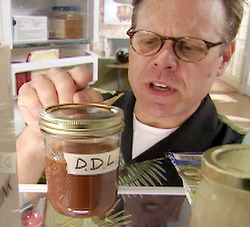 Lactose is not as sweet on the tongue as sucrose, which can be a very good thing. For proof we turn to another milky marvel from south of the border, Dulce de leche, which translate (loosely) to "milk jam," probably evolved not as a confection but as a way of preserving milk without refrigeration in tropical climes. Whatever the reason for the existence, it's a delicious syrup, as thick as caramel but better, if you ask me.

Combine the milk, sugar, vanilla bean and seeds in a large, 4-quart saucepan and place over medium heat. Bring to a simmer, stirring occasionally, until the sugar has dissolved.

Once the sugar has dissolved, add the baking soda and stir to combine. Reduce the heat to low and cook uncovered at a bare simmer. Stir occasionally, but do not re-incorporate the foam that appears on the top of the mixture. Continue to cook for 1 hour.

Remove the vanilla bean after 1 hour and continue to cook until the mixture is a dark caramel color and has reduced to about 1 cup, approximately 1 1/2 to 2 hours. Strain the mixture through a fine mesh strainer. Store in the refrigerator in a sealed container for up to a month.

Tidbit: The alkalinity of  the baking soda prevents the milk from curdling and promotes browning in the dulce de leche.